38 State Brewing Company is our first featured brewery in Littleton, CO, and they’re also the first brewery/taproom located in Littleton. The name 38 State Brewing is in honor of Colorado becoming the 38th state to join the union in 1876. I had the opportunity to get some background information on 38 State Brewing from Brett Blazek, VP of Marketing, and one of the 4 part owners of the brewery. 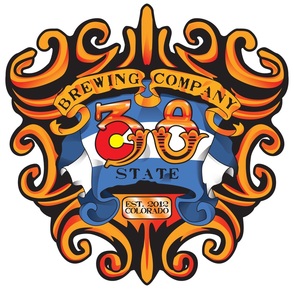 38 State Brewing started much like everyone else (homebrewers), and decided to take their passion for brewing to the next level after friends and family gave them ample amounts of positive feedback about their product. Initially they began brewing as a hobby, never thinking it would escalate to anything more than that, but friends can be quite persuasive, so they decided to take 38 State to the next level and open their very own brewery.

38 State Brewing is currently located at 8071A S. Broadway in Littleton, which makes them the very first brewery/taproom in the city. 38 State is strictly a brewery, so they don’t have the capability of preparing any food on site (like the Old Mill Brewery/Restaurant – also in Littleton). The team at 38 State is quite excited to be labeled with the distinction as Littleton’s first true brewery/taproom, and look to cater to those locals who have desperately wanted a place to call their own. The brewery and taproom is located just north of C-470 & Broadway.

The four owners of 38 State Brewing are: Mike and Kim Keating, Jason Virzi, and Brett Blazek. When you take a married couple, high school friends, and literal neighbors… and put all of that together, along with their backgrounds (Mike – Master Gardener, Kim – CFO of a payment processing company, Jason – Aviation Project Manager, and Brett – a humble school teacher), you get the heart and soul of 38 State Brewing Company! 38 State Brewing is glad they could come together and give Littleton something that it has been missing, and hope they will continue to do so for decades to come. In my visit with Brett Blazek, it was evident there is a ton of passion behind what is being done at 38 State Brewing. Great beer, good friends, and a fun place to get together is how I would describe what the owners of 38 State have created.

38 State is about as small as a nano-brewery can get. The brewery is currently running a one-barrel system made by Ruby Street Brewing (out of of Fort Collins). Head brewer, Mike Keating, along with two assistant brewers put in long hours the one-barrel system to ensure that 38 State can meet the demand of its patrons. 38 State opened to the public on May 10, 2014 and had such a positive turnout that they actually went light on a couple of their beers due to demand being so high. This was great news for the brewery, but meant that they would have to crank up the production schedule.

The team at 38 State is quite fond of their little one-barrel system as it allows them to not only produce their staple beers, but gives them the freedom to try new things, recipes, ideas, etc. knowing that if lightning doesn’t strike, they’re only out one barrel as opposed to twenty. This freedom and creative approach is what they began with back in the garage while homebrewing, and they continue to keep the same thought process day in and day out. One of the many things that 38 State is proud of is the truly “hands-on” approach to what they do. According to Brett Blazek, “Each day our grains are milled by hand, and that hands-on process doesn’t leave until that beer is poured into a guest’s glass. Milling, steeping, stirring, transferring, pouring… it’s all done (by hand) by our fantastic staff who understands what it takes to make a great pint of craft brew.” 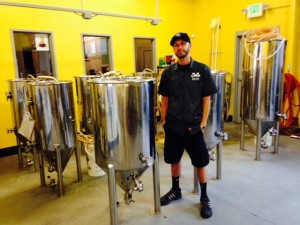 The Beer: In addition to the list below, 38 State plans to constantly introduce new styles to keep their beer selection fresh and different. Since their opening they’ve also showcased a small batch of Broadway IPA (a traditional IPA), and have two others debuting within 10 days time. As Brett Blazek puts it, “Again, we have this creativity per our one-barrel system, and we couldn’t be more excited to give the people something new time and time again.”

One thing I think is really cool about 38 State Brewing is that they’re still figuring out which beers are the most popular. Since they’ve only been open about a month, they’re taking feedback from patrons to figure out which beers should become a staple. Visitors of 38 State have the distinct opportunity to help shape future beer offerings by trying different beers, and providing feedback to the staff. It’s pretty cool that the people coming in to try a fresh craft beer, may also be the reason one of 38 State’s beers becomes a local favorite.

38 State’s current stable of beers consists of a little something for everyone. Keep in mind that with the current system, styles will be rotating frequently. The beer listed below may not be available tomorrow. The good thing is that overall, 38 State brews awesome beer, so you’ll be able to pick at least 1-2 that you’ll really enjoy when you visit.

After visiting 38 State Brewing, and sitting down with part owner, Brett Blazek, I can say without a doubt that beer drinkers will enjoy visiting the first brewery and taproom in Littleton. The atmosphere is inviting and the feel of the taproom is unique. 38 State is located in an area that is predominantly automotive. There are repair shops, dealerships, and other automotive business close by. The building they’re located in is actually an old garage that has been revamped, and now has the feel of a modern cabin. There’s nice woodwork on the walls, flights are served on hand-crafted wooden serving trays, and the old garage doors open to give the taproom an outdoor feel. Of course, if you want to sit outside, there is a nice patio in the front as well. It’s fitting that 38 State opened in an old garage, as that is how the owners began brewing together years ago. I look forward to seeing the growth of 38 State Brewing, and will definitely be heading back to try more of their outstanding Colorado craft brews. Check them out at the link below.