AC Golden Brewing Company, the makers of Colorado Native Lager, are offering free Blue Spruce saplings to those interested in regrowing the state. For full details see the flyer and additional information below. 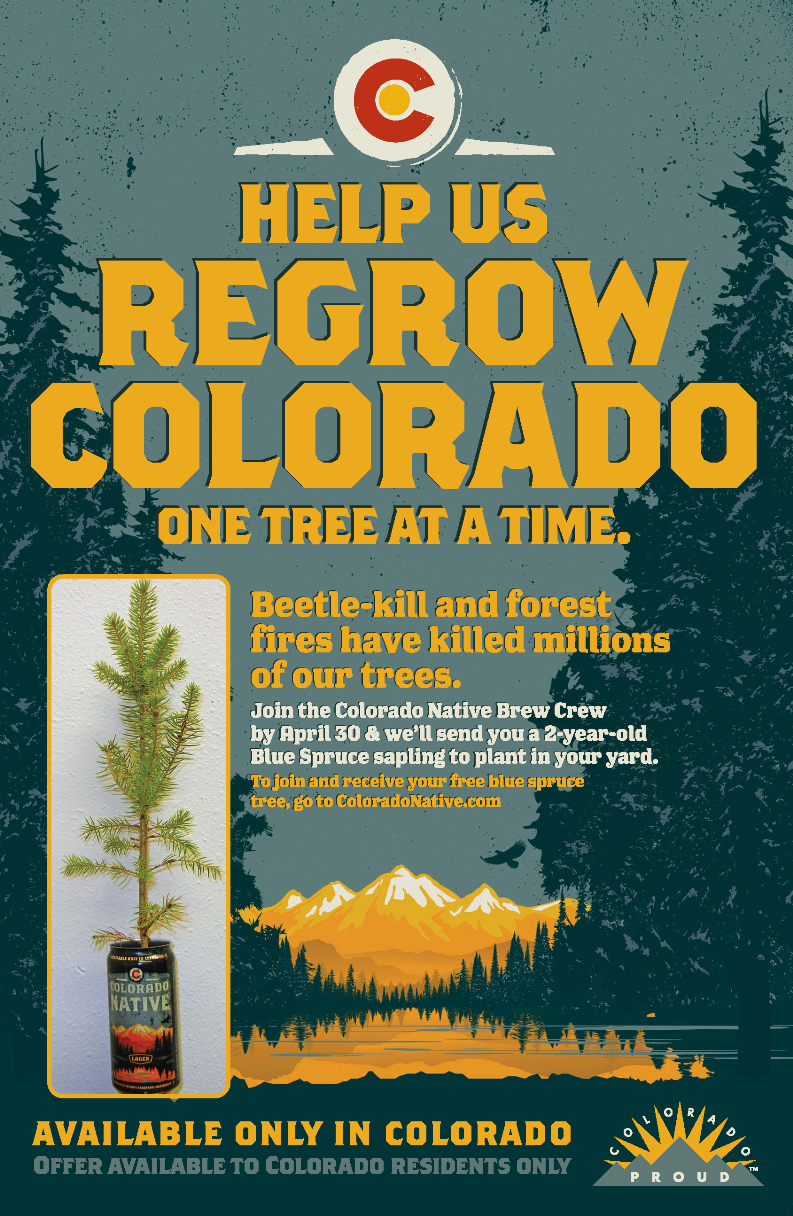 After several years of devastating wild fires and beetle infestation, and last year’s 100-year flood, the state’s forests and urban areas have lost millions of trees.

To celebrate Arbor Day, which is Friday, April 18 in Colorado, and to help regrow Colorado, locals can join Colorado Native’s club, The Brew Crew, and request a free Blue Spruce sapling be sent to their home for planting.

The Blue Spruce saplings, about 1½ years old, were grown by and purchased from the Colorado State Forest Service’s Seedling Tree Nursery in Northern Colorado.  The trees come ready to plant.  The Blue Spruce is Colorado’s state tree and is well suited to the local environment.

“As Colorado’s home grown beer, Colorado Native Lager is the perfect fit for helping Coloradans regrow the state, one tree at a time,” said Glenn Knippenberg, president and co-founder of AC Golden Brewing Company, brewer of Colorado Native. “Colorado Native is brewed with 100 percent Colorado ingredients, and is packaged and shipped only in Colorado. We reinvest 25 cents from every single case sold back into the state through projects like this one.  Colorado is our home and we feel strongly that our efforts and investments should benefit our beautiful state,” said Knippenberg.

To receive a sapling, go to www.ColoradoNative.com during April and click on Brew Crew.  There is no cost to join the club. Members receive free gifts and special offers like this one. Last month, Brew Crew members were able to join Colorado Native’s legion of volunteer hop growers and receive a free hop rhizome.  Members can grow and harvest their hops for inclusion in a Colorado Native brew in the fall.

About CSFS Seedling Tree Nursery
The Colorado State Forest Service (CSFS) seedling tree program allows farmers, ranchers and rural landowners to obtain trees at a nominal cost. Its goal is to encourage landowners to plant new forests; to establish effective windbreaks that reduce erosion; to protect homes, cropland, livestock and highways; and to enhance wildlife habitat. The nursery has many outdoors acres and an 18,000 square foot greenhouse. It sells an average of one million seedlings annually.

About Arbor Day –
Arbor Day is a nationally recognized day to encourage individuals and groups to plant and care for trees. It originated in Nebraska City, Nebraska in 1872.   National Arbor Day is April 24 this year however each state observes its own date to facilitate the best tree planting time.  Colorado’s Arbor Day this year is Friday, April 18.

About AC Golden Brewing Company
AC Golden Brewing Company, located in Golden, Colo., is a small-batch brewery specializing in handcrafted beers for discerning beer drinkers. Among its beers are: Colorado Native, an amber lager made with 100 percent Colorado ingredients; Herman Joseph’s Private Reserve, a German-style lager; Barmen, a German-style pilsner, and Winterfest, a Vienna-style lager shared only during the holidays.