AC Golden Brewing Company, the makers of Colorado Native Lager, announced this week they have a new addition to their Colorado beer lineup, Colorado Native IPL. IPL is an India Pale Lager, which is a newer style, and not seen very often. Colorado Native IPL is similar to an IPA (India Pale Ale) with a big hop flavor, and aroma. The main difference is the IPL is brewed with a lager yeast, which makes for an extremely smooth, balanced taste. You still get the hops you would in a typical IPA, but the bitterness is really toned down. I’m an IPA drinker, and found IPL to be a really good beer that is perfect for someone wanting to try something hoppy, but doesn’t like too much bitterness. Colorado Native IPL is a full bodied, hoppy, All-Colorado beer that I highly recommend trying. 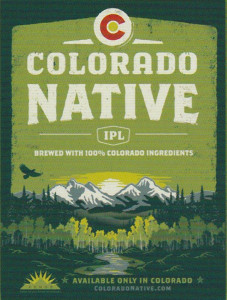 There are many beer drinkers that say Colorado Native is simply a Coors product in flashy new packaging. I’ve been lucky enough to visit AC Golden twice – where I met the small staff, and brewers that brew the beer. Colorado Native is brewed in a small brewery within the Coors facility in Golden, however the production is on a very small scale in comparison. Colorado Native is unique in the fact that it’s brewed with only Colorado ingredients. Due to only being brewed with Colorado water, hops, barley, and the oldest yeast strain in the state, AC Golden can only produce a small amount of beer. Colorado does not have a big enough hop output to be able to produce Colorado Native in the large quantities of a Coors Light, or Coors Banquet. So for those of you that think Colorado Native is just another Coors product, I hope you realize that is not the case. While the beers are held to the same high quality standards as Coors, Colorado Native is produced by a small, passionate staff that puts a lot of love into what they do. For more of a background on AC Golden, check out the details from my first visit, here.

I visited with AC Golden’s President and Co-Founder, Glenn ‘Knip’ Knippenberg, Brewer, Jeff Nickel, and Marketing Consultant, Aimee Valdez. I spent a couple hours finding out about Colorado Native IPL, touring the brewery, and trying IPL at different stages in the brewing process. The team at AC Golden is as excited about their product as any brewery I’ve featured so far. From using only Colorado ingredients, to taking on a newer style of beer, the team at AC Golden impressed me with their genuine passion for what they do, and the commitment to making an excellent product that is only available in Colorado.